At the beginning of the year, I had a profound experience with God that completely shifted the way I saw everything. I mean everything. Since then, I have been on an all-consuming self-help kick – my own experiment with personal alchemy. I have submersed myself in so many books on manifestation and visualization that I’m probably quoting this stuff in my sleep. It’s been a fabulous journey of inspiration, reflection, and mind-blowing epiphanies, mixed with the random bout of overwhelming doubt here and there. Regardless of the occasional stumbles, I’ve never felt so positive and motivated in my life.

My latest shelf-help acquisition is the book 29 Gifts: How a Month of Giving Can Change Your Life by Cami Walker. At the age of 33, and only 1 month after her wedding, the author was diagnosed with MS. Over the next two years her health deteriorated rapidly. Soon she was in and out of emergency rooms, in constant pain and unable to walk. Her thoughts were consumed with negative and fearful worries about her future. Then she received an unusual prescription from a spiritual advisor, an African medicine woman named Mbali Creazzo. Mbali told Cami to give away twenty-nine gifts in twenty-nine days. The idea was to shift her head space from one focused on self-pity and lack to one focused on meaningful interaction and abundance. Well, as the title of the book implies, this ritual of giving changed the author’s life. Almost immediately she began to experience positive changes – strangers paying for her meals, new business clients coming out of nowhere, and her health took a dramatic upswing. Cami was so moved by what she dubbed The Giving Challenge that she put up a website and invited others to try their own giving experiment. 29 Gifts.org is now a global online community filled with inspirational stories from thousands of people who have taken on the Giving Challenge for themselves.

The old me of six months ago wouldn’t have given this book a second thought, even if my most trusted friend had recommended it. No T, no shade. It’s just the kind of thing that wouldn’t have held my interest. But now, I’m a believer in miracles and I’m willing to try anything that might provoke a positive shift in my life. And if I’m being completely honest, things have not been all affirmations and rainbows in my head. Although I’ve noticed a positive change in the headspace surrounding my career, at the same time I’ve become more critical of those around me, especially those closest to me. At first, I didn’t understand what was happening. How could I be so inspired and motivated, yet be hyper critical and judgmental at the same time? My therapist, Diane, gave me the answer. She pointed out the way I use criticism of others to avoid dealing with my own shit. She ordered me to stop focusing on others and start working on myself. Easy enough to say but really hard to do. I’ve been using this avoidance technique for a long time, you know. Then Cami’s experience gave me an idea. What if the solution was not to stop focusing on others but to focus on others in a different way? What if by giving I could shift my perspective? I decided to give it a try.

According to what I had learned from the book, the challenge has only a few rules. 1) I must give away one gift a day for twenty-nine days. The gifts do not need to be large or showy. They do not even need to be material. The goal is to give with my heart, which leads to another rule. 2) Each gift should be meaningfully chosen and given. After all, one of the goals is to increase personal connections with others. 3) If I miss a day of giving, I have to begin again at Day 1. This is a common instruction for rituals of dedication. The reason being that energy builds over the course of the ritual. If I miss a day, the energy will disperse, and I will need to start all over. 4) I must keep a journal of all my gifts. I thought Pentacles & Pavement would be the perfect place to record my experiences. Lucky you (wink).

Starting this challenge was kind of a whim. I hadn’t planned anything, which it turns out is a good thing. Mbali counseled Cami to let her gift giving be organic and intuitive. On Day 1, I busily cleaned the kitchen and contemplated what gift I could give that day. I decided a phone call would be a good place to start. There are quite a few people in my life to whom I could be paying better attention. I settled on calling a longtime friend of mine. This friend and I used to be so close that we jokingly told people we shared the same brain. But after 20 years of growing up, and growing apart, we rarely talk. I’ll admit, initially I was not looking forward to making the call. We had become such different people over the years. Recently I’d found our infrequent conversations to be boring at best and irritating at worst. It just doesn’t seem like we have a whole lot in common in our present lives.

Feelings of resentfulness began to emerge as I anticipated making the call. Resentfulness vibrates at the same frequency as scarcity. That was definitely not how I wanted to approach this first gift. I needed to raise my frequency if I wanted to make this call from a place of giving and abundance. So, I closed my eyes and took three cleansing breaths. I focused on my friend’s humanity, not her political or personal choices. I thought about our joint connection to the Source of all things. I visualized my heart chakra opening and spilling forth a loving, healing pink light. With each breath I could feel the resentment melt away. I made the call.

“Hello,” my friend answered the phone.

“Not too good,” she said, in a dead pan voice. “I got fired today.” For a moment I couldn’t say anything, just stammer in confusion. I knew my friend had been having difficulties in some areas of her life, but I assumed her career was still rock solid. For the barest sliver of a second, the voice of judgement almost crept into my head. Before it could take root, however, compassion won through. I found myself connecting to my friend on an emotional level I haven’t felt in years. In that moment, I was so glad I had made the call.

Over the next thirty minutes she shared with me the circumstances leading up to this shocking turn of events. With pure sincerity I told her I was sorry. Last year, I quit my lucrative job because I was being harassed by my supervisor. I spent the next eight months unemployed and looking for work. I told her I understood the pain of losing a job into which so much passion has been poured. At one point she said, “I know you get it” and she sounded relieved to be talking to someone who understood. Eventually the conversation turned to dark humor at the expense of the those responsible for my friend’s dismissal. Neither one of us are the kind to sit around and kick rocks for very long. Wrapping up the call, we both promised to be there for one another more often.

I hung up feeling lighter and more positive about our friendship than I had in years. That’s when I realized this challenge really does have the power to change my life.

I can’t wait to see what Day 2 has to bring.

I’ve been interested in domestic witchcraft for years and have been magickally fortifying my living spaces since I was a neophyte in the Craft.  The one place I never flexed my magickal muscles, however, was the kitchen.  I was always too intimidated.  Then I attended a workshop at this year’s Pagan Pride taught by Dawn Hunt, founder of Cucina Aurora. Her fun and upbeat introduction to kitchen witchery was just what I needed to light my culinary candle and to brush away the cobwebs of fear.

Following Dawn’s example I purchased a cute black apron that has “witch” bedazzled in red across the chest.  This apron has become my ritual robe for performing kitchen witchery.  I also bought a small pumpkin spice-scented, magickal housewarming candle that I light before performing any kitchen magick.  Now I have a little ritual I perform before baking or cooking.  I begin by making sure my kitchen is clean.  That’s a given in my OCD world.  I wash my hands and happily slide into my apron.  Then I light the candle and say a quick prayer to Hestia.  I ask Her to inspire me with Her sacred light and to help me prepare food that is both nourishing and delightful.  When performing longer kitchen rituals I will cast a whole circle and invite the spirit of the elements, as well.

Ritualizing my work in the kitchen has done many things for me.  It has given me structure, which has boosted my confidence.  Now when I prepare food it always feels meaningful and fun.  Working in the kitchen has changed from a domestic chore into a time for personal expression.  I love spending time in the kitchen now and it seems like everything that I produce is touched with a bit of magick and joy, even if I do make a few mistakes. :{  As my confidence in the kitchen grows I hope to become bolder with recipes, learning to branch out and experiment a little.  This is a whole new, delicious path that I’ve embarked on and I can’t wait to see where it leads me. 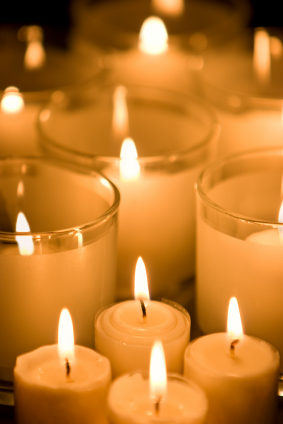 In the past, Imbolc was a sabbat without meaning for me, primarily because many of the books on sabbats only focus on the goddess, Brigid, at this time. Since I don’t follow a Celtic path, the focus on Brigid, amazing goddess that she is, held little meaning for me.  All that changed last year while I was working on an organic farm in mid-February.  It was cold and snow covered the ground.  By all outer appearances the world was still sleepily locked in the grip of winter.  It was at this time that the owners began tapping the maple trees for sap. Although everything seemed cold and lifeless outside, beneath the bark these trees were pulsing with life.

That’s when I discovered the true meaning of Imbolc.  Imbolc is all about potential, the spark of life.  At Imbolc everything is new and nothing has been decided.  It’s the most exciting time of the year to cast spells because, at Imbolc, life is full of endless possibilities.  At New Year I like to create wish lists for the coming year, but at Imbolc I like to do serious planning. It’s at Imbolc that I decide the paths I will pursue throughout the year and where I will spend my precious reserves of energy.  I take the spark of life, so nascent and energetic, and place it into the seeds that I will (literally and metaphysically) plant in the spring.

What really makes Imbolc so powerful, so wonderful, and so special is hope. Everything is just beginning at Imbolc. There are no regrets, yet.  Nothing is spoiled.  I can begin anew each year, just like nature does.  So I take this time between now and Ostara to purify myself, both physically and metaphysically, and to prepare myself for the blooming of spring.  At Imbolc the world is renewed and anything is possible.

Pentacles & Pavement is a compendium of rituals, recipes, experiments, and musings. After more than 20 years of practicing the Craft, I continue to discover something new and mind blowing every day. By sharing these gleanings, I hope to inspire someone else’s expansion and curiosity. Enjoy the journey.